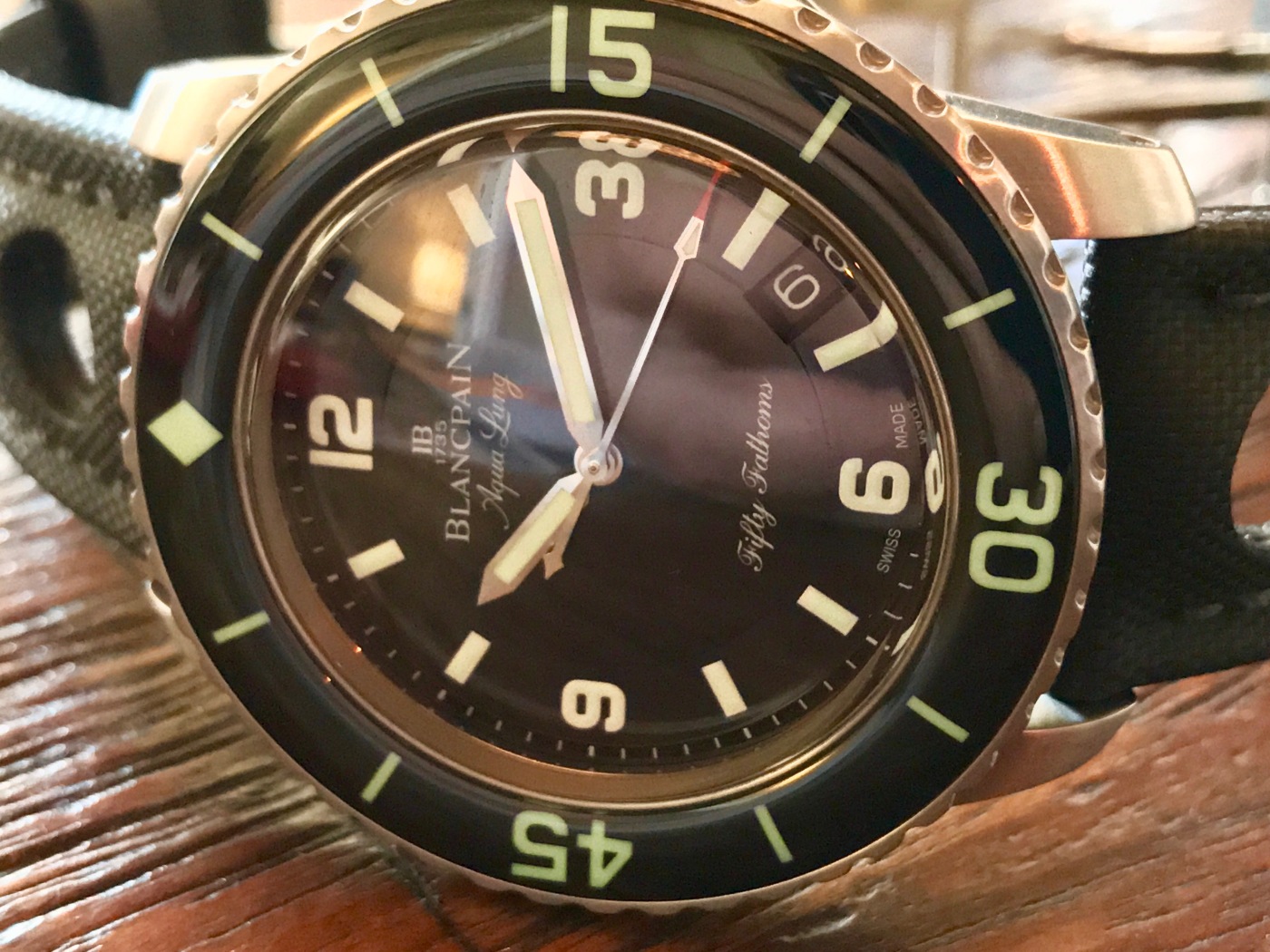 The Blancpain Fifty Fathoms. The world’s first dive watch from the world’s oldest watch brand. It’s a legendary timepiece and a little piece of history. And the Tribute to Aqua Lung model adds some additional pretty special things, too.

A few weeks ago I purchased a pre-owned Fifty Fathoms from Peter Bell at Govberg/Watchuwant. I’ve bought about a half-dozen watches from Peter and he’s always treated me fairly.

The Sincerest Form of Flattery

I knew I wanted a Fifty Fathoms – always had. I resisted the temptation to pick up one of the Fifty Fathoms Bathyscaphe models pre-owned a few times. It’s a beautiful watch too, but the BIG fat sapphire bezel on the original FF model has long been the draw to me. The Bathyscaphe has a nice, narrow sapphire bezel. I like it too – in fact I own the Bremont Boeing Model 1 that definitely took it’s design “cues” from that watch (and I am being VERY kind to Bremont with that “cues” remark). Take a look at them side by side.

Aside: Now there are a LOT of things that Bremont does to the Boeing Model 1 on top of this that are pretty spectacular. The movement is richly detailed – one of the best treatments of an ETA 2836 I’ve ever seen. The Trip-Tick case is cool. The white dial has this amazing flat but pearl-essence look to it that makes it POP. The nylon strap has cool blue piping. The crown at 4:00 (and the machined crown guard) is neat. And the fact that it uses crazy-tough Custom 465 Stainless Steel – the same alloy developed for the aerospace industry and used by Bowing on the undercarriage of 747s and F-18s is something unique for a timepiece. But let’s get back to the Fifty Fathoms…

Houston, We Have a Problem

The watch arrived looking perfect (with all paperwork, packaging, tools and hang tags) but it appeared that the rotor screw was loose and the rotor was not spinning. At all. It was keeping great time – I put it on the timegrapher: +2 to +5 in all positions. But it arrived essentially as a manual wind Blancpain Caliber 1315 instead of an automatic. Not good.

So I texted Peter at Govberg/Watchuwant soon after receiving the watch and showed him a hastily-shot (and relatively crappy) video of the movement issue. He agreed that something was wrong and showed it to Michael Michaels, the main watchmaker there at Watchuwant (another great guy that I’ve gotten to know – virtually – from his YouTube videos with Tim Mosso). Peter said that the rotor was spinning fine when it left Philly the night before he shipped it. The FedEx box it arrived in had a slight dimple on one of the corners. I don’t know whether that caused the issue or it was something else unrelated. Anyway, Peter was going to fix it ASAP.

Peter sent me a FedEx slip to ship him back the watch on Tuesday. He got it Wednesday. The watchmaking team opened it up and adjusted it. Took 2 minutes Peter said. The watch was shipped back to the the same day.

What’s with the Aqua Lung?

The Blancpain Caliber 1315 movement (which I couldn’t see completely when I received the watch the first time because the rotor wasn’t spinning) has some lovely hand finishing. The perlage on the rotor is the big draw – but the rest of the movement (including those THREE barrels for nice 120 hour power reserve) is really nice. This is a pseudo-tool watch, so they also showed some restraint with not tricking it out too much.

The sapphire bezel is the big thing for me on the front, with the lume baked in. Because this is the AL tribute – they don’t have the minute hash marks in the fifteen minute section, so it cleans up the front and makes it look more traditional (although I kind of like the hashes on the regular one).

The strap – what can I say. The Fifty Fathoms sailcloth strap is unlike anything else. This one has those 70s-era cut-out holes which makes it even more distinctive. If this were one of my only watches, I’d probably go with a more conservative strap. But I am lucky to have a few dive watches – so the uniqueness is a plus. The deployant is super nice and the engraving on it is top notch. It’s one of those deployants where the diving suit extension is integrated into one of the two butterfly clasps. Flip one of the two butterfly clasps out, close it and you have an extra inch or so.

Finally, the size. It’s a biggie at 45mm. But it doesn’t wear that big. It feels smaller than some of my PanePai (like my PAM233 at 44mm and my PAM183 at 45mm). Maybe the size of the bezel changes the proportions a bit – but this guy is comfortable on the wrist.

I’m very pleased with this watch once I got it working correctly. The fit and finish is excellent, I especially like the brushed/satin finish on the Aqua Lung variant – I think the polished case on the regular Fifty Fathoms is a bit too much. One more thing on the case – I thought I would dislike the “Blancpain” wordmark/logo on the 9 o’clock side of the case. Now that I have worn the watch for a few weeks – I like it. It’s one of those things that typically only the wearer sees and it’s a nice embellishment. 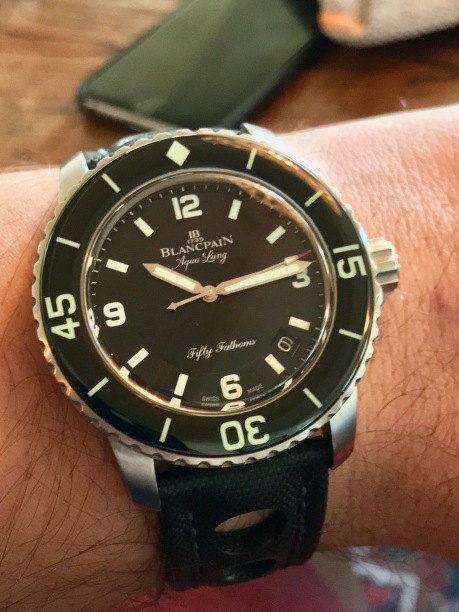 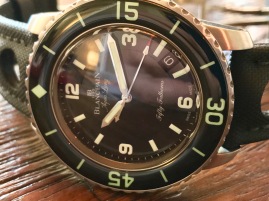 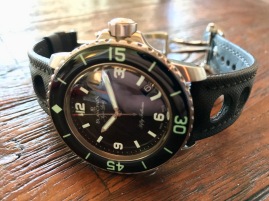